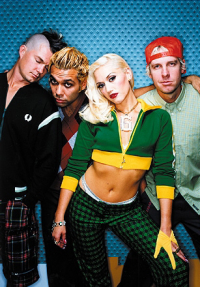 No Doubt is an American rock band from Anaheim, California, that formed in 1986. Since 1989 the group has consisted of vocalist Gwen Stefani, guitarist Tom Dumont, bassist Tony Kanal, and drummer Adrian Young. Since 1995, in live performances they have been supported by trumpeter and keyboardist Stephen Bradley and trombonist and keyboardist Gabrial McNair. The ska sound of their first album No Doubt (1992) failed to make an impact. The Beacon Street Collection (1995) is a raw expression of their sound, inspired by ska punk and released independently by the band under their own record label. The album sold over 100,000 copies in 1995, over three times as many as their first album sold. The band's diamond-certified album Tragic Kingdom (1995) helped launch the third-wave ska revival of the 1990s, and "Don't Speak", the third single from the album, set a record when it spent 16 weeks at the number one spot on the Billboard Hot 100 Airplay chart.