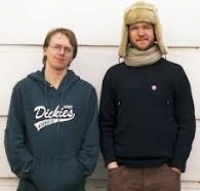 Nizlopi were a two-piece band, from 1993–2010, with Luke Concannon on vocals, guitar, and bodhrán, and John Parker on double bass, human beatbox, and providing backing vocals. They were based in Leamington Spa, England. Prior to attending The Trinity Catholic School, Luke and John attended Chandlers Ridge Primary School. The band is named after a Hungarian girl who Luke had a crush on at school. The band members have confirmed that they split on 10 February 2010.