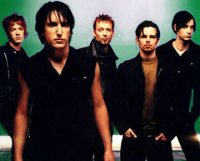 Nine Inch Nails (abbreviated as NIN and typeset as NIИ) is a critically and commercially successful American band formed in Cleveland, Ohio in 1988 by Trent Reznor.

The only constant member of Nine Inch Nails is singer/producer/multi-instrumentalist Trent Reznor, who has always remained solely responsible for NIN's musical direction.

NIN's sound has variously been described as alternative, electronica, heavy metal, rock, synth pop, or, most commonly, industrial or industrial rock. Regarding his music being categorized as industrial, Reznor said in a 1994 Axcess Magazine interview:

What was originally called industrial music was about 20 years ago Throbbing Gristle and Test Dept. We have very little to do with it other than there is noise in my music and there is noise in theirs. I'm working in the context of a pop song structure whereas those bands didn't. And because someone didn't come up with a new name that separates those two somewhat unrelated genres, it tends to irritate all the old school fans waving their flags of alternativeness and obscurity. So, I'd say I've borrowed from certain styles and bands like that.

NIN's debut album, Pretty Hate Machine (1989), largely consists of studio versions of demo recordings (released later unofficially as Purest Feeling.) This was also NIN's first collaboration with producer Mark 'Flood' Ellis. It went triple platinum in the U.S. and produced the singles "Head Like a Hole", "Down in It", and "Sin". Music videos were made for all three tracks, but the video for "Sin" was not released to the public until 1997, with the release of Closure.

In the credits of Pretty Hate Machine, Trent Reznor thanks British Horror/Fantasy writer Clive Barker for inspiration towards the stirring sound the album portrays. As of August 19, 2005, the ownership rights to the album were put up for auction by TVT Records, compliments of Prudential Securities Financial Services. It was part of an overall biddable package that also included the rights to the Television's Greatest Hits compilations and the Mortal Kombat movie soundtracks. In addition, the highest bidder would also be able to collect a percentage on future sales of Nine Inch Nails' other TVT-related releases, including Broken, Fixed, The Downward Spiral and Further Down the Spiral. Rykodisc, who did not win the auction but were able to license the rights from Prudential, re-issued Pretty Hate Machine on November 22, 2005. Rykodisc wanted to release a Deluxe Edition of the album, similar in concept to the Deluxe Edition of The Downward Spiral, however Reznor was not willing to produce it without payment. Rykodisc also re-released Pretty Hate Machine in 12" vinyl, as well as the single "Head Like a Hole", on January 31, 2006.

NIN's second major release was Broken (1992), an EP of six tracks plus two bonus tracks. It was originally released in a fold-out format, containing the first six tracks on a regular CD and an additional three-inch mini-CD with the remaining bonus tracks. After Trent Reznor discovered that some unscrupulous record store owners would remove the mini-CD and sell it separately, it was later released as one CD, with the bonus songs as "hidden" tracks 98 and 99. The song "Wish", aided by the video directed by Peter 'Sleazy' Christopherson of Coil, won a Grammy in the "metal" category. Jon Reiss directed a music video for "Happiness in Slavery," which was almost universally banned due to its graphic content. The video depicts performance artist Bob Flanagan strapping himself to a machine that subsequently pleasures, tortures and kills him. A video for "Pinion" aired twice on MTV before being banned for its objectionable content, although images from it did become a fixture in the opening title sequence of the MTV show Alternative Nation. A full length video informally called The Broken Movie was also made by Sleazy, but has not seen an official release. The Broken Movie, as of 2005, can only be found on bootleg. Broken was followed by the remix EP Fixed.

NIN's second full album and third major release was The Downward Spiral (1994). This was NIN's second collaboration with Mark 'Flood' Ellis. Two singles, "March of the Pigs" and "Closer", were released from this quadruple platinum album, and two additional tracks, "Hurt" and "Piggy", were sent to radio without a single release. Music videos were made for "March of the Pigs", "Closer", live footage of "Eraser" (which would never receive airtime) , and "Hurt". The edited MTV version of "Closer" became very successful. The video for "Closer" (directed by Mark Romanek), in many ways, set a standard for Nine Inch Nails videos with its eerie images of pigs' heads and S&M paraphernalia. Also, "Closer" was remixed and used for the opening credits of the movie "Se7en". The album's final track, "Hurt", would enjoy success once again when it was covered, with slight alterations to the lyrics, by Johnny Cash in 2003. In 1995 David Bowie sang a duet version of "Hurt" with Trent Reznor on the Outside tour.

The Downward Spiral was followed by the remix EP Further Down the Spiral, which featured a collaboration with electronic music pioneer Aphex Twin and new guitar parts being lent by Jane's Addiction guitarist Dave Navarro. A remastered version of The Downward Spiral was released on November 23, 2004, with an accompanying CD of B-sides and rarities. The remastered recording was also released as a two-sided DualDisc. The Deluxe Edition of the remaster features multichannel and stereo SACD versions of the album as well as a remastered standard CD layer on the first disc, and stereo SACD and standard CD layers on the second. The DualDisc contains a remastered CD-Audio on one side and features a DVD-Audio format side containing High Resolution Stereo and 5.1 Surround mixes of the entire album with expanded album art, a discography, and music videos "Closer" (stereo and surround), "March of the Pigs", and "Hurt (Live)".

NIN's fourth major release was the two-disc album The Fragile (1999). It produced three singles, one released in the US ("The Day the World Went Away"), one in the UK ("We're In This Together") released as a 3 part single, and one in Japan and Australia ("Into The Void"). Music videos for "We're In This Together", "Into The Void", and "Starfuckers, Inc." (retitled as "Starsuckers, Inc.") were aired in the US.

"Starfuckers, Inc." was a parody of Reznor's former friend and prot?g?, Marilyn Manson. Several vocal takes were chopped up and spliced together as a not-so-subtle jab at Manson's usual inability to capture his desired vocal style in a single take. The lyrics satirized Manson as being vain and insincere. Manson and Reznor later reconciled, and Manson even appeared in the music video for Starfuckers, Inc.

In interviews prior to the album's completion, Reznor said he was considering organizing the tracks such that one disc would contain all instrumentals and the other the songs with lyrics. These plans changed when Bob Ezrin (producer of Pink Floyd's The Wall) suggested an arrangement of tracks that would strengthen the "four corners of the album"?namely the beginnings and ends of each of the two discs. Ezrin is credited in the liner notes as having "provided final continuity and flow".

The Fragile was followed by the remix album Things Falling Apart. The Fragility Tour was recorded and released on CD and DVD as And All that Could Have Been. A special edition came with a companion disc called Still, featuring acoustic re-recordings of songs from across NIN's career along with several new songs. Still is regarded as a classic among fans, and there was much speculation prior to the release of With Teeth in 2005 that the album would take a form similar to Still. Three videos for Still were released on NIN's official website.

NIN's fifth major release, With Teeth (tentatively titled Bleedthrough), was written and recorded following Reznor's battle with alcoholism and substance abuse. The album involved the collaboration of the Foo Fighters' Dave Grohl (ex-Nirvana) playing live drums for many of the songs. The music video for the first single, "The Hand that Feeds", premiered on the official NIN website rather than on the traditional music video channel. The album was leaked prior to its official release on May 3, 2005 on both CD and DualDisc formats. Though the package for the album lacks the typical liner notes, nin.com/with_teeth features access to download a digital PDF poster full of stylized artwork and lyrics. The band allowed the entire album to be listened to in streaming audio at MySpace beginning April 27, 2005. The vinyl, Japanese, Australian & UK release of With Teeth all featured an extra track, "Home", a leftover cut from the With Teeth recording sessions. Along with the standard edition and "Limited Tour Edition", a DualDisc version is available, which features With Teeth in stereo and 5.1 surround sound, DVDA stereo and surround playback, a Dolby Digital stereo and surround mix, the music video for "The Hand that Feeds", an interactive discography, and a slideshow of NIN-related images.

Nine Inch Nails dropped out of the 2005 MTV Movie Awards show because of a disagreement with MTV over the use of an unaltered image of George W. Bush as a backdrop to the band's performance of "The Hand that Feeds", which includes such lyrics as:

What if this whole crusade's a charade

And behind it all there's a price to be paid

For the blood on which we dine

Justified in the name of the holy and the divine

"Apparently, the image of our president is as offensive to MTV as it is to me", Reznor said. They were replaced on the show by the Foo Fighters.

In fall 2005, Nine Inch Nails launched a North American tour supported by Queens of the Stone Age, as well as Autolux for the first half of the tour followed by Death from Above 1979 during the second half.

The second single for this album, released in mid-July, was "Only." A video for "Only" was completed around May. It was created using primarily computer-generated imagery, and directed by David Fincher. It debuted on July 11th on Fuse and can been seen on the band's official website.

In April of 2005, Trent Reznor released the source files for "The Hand that Feeds" in Garageband format, to allow his fans to remix it. The release spawned an Unofficial Remix Contest, in which over 500 fan remixes were submitted. After receiving such a tremendous response from this "experiment", the source files for the next single "Only" was released in a wider range of formats. On the NIN official Web site, Reznor said: "There is no agenda here other than for you to explore, experiment, and have fun with it, I'm looking forward to hearing what you come up with." Fans were able to access The Ninremixes Myspace Page to upload their remixes, vote for their favourites, and comment about their experiences in a blog. As an alternative to this, fans also created a database with similar features to host these as well as other remixes, creating one of the largest fan created media sites to date, ninremixes.com. The source files are in various file formats, including Garageband and ACID formats. They can be found on nin.com.

In the months following the release of With Teeth, two new Nine Inch Nails songs surfaced: "Non-Entity" recorded live at the ReactNow! Hurricane Katrina benefit concert. "Not So Pretty Now" has appeared on the setlist of a few recent Nine Inch Nails live shows, but has not yet seen a studio recording release.

On December 10, 2005, Nine Inch Nails performed at the sixteenth annual of the Acoustic Christmas by the Los Angeles, California radio station KROQ. It was the first time the band ever performed at KROQ concerts.

With Teeth was RIAA Certified Platinum in March 2006.

As of January 4, 2007, the album is being mixed and is due out for April. Although the exact date has not been announced, the UK online retailer Play.com began taking pre-orders for the new NIN album, listing April 16 as the release date. This implies a US release date of Tuesday, April 17.