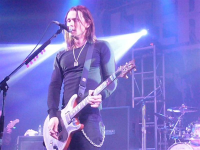 Myles Richard Kennedy (born Myles Richard Bass; November 27, 1969) is an American musician and singer-songwriter best known as the lead vocalist and rhythm guitarist of the rock band Alter Bridge, and as the lead vocalist in Slash's current solo project. A former guitar instructor from Spokane, Washington, Kennedy is known for his ability as both a guitarist and a vocalist, possessing a tenor vocal range that spans four octaves. He has worked as a session musician and songwriter, making both studio and live appearances with several artists over the years and having been involved with several projects throughout his career. Most notably, Kennedy rehearsed and collaborated with former members of Led Zeppelin for an unreleased project featuring Jimmy Page, John Paul Jones, and Jason Bonham in 2008. More recently, he has become known for his several collaborations with Slash, starting with his vocal contributions to two songs on Slash's self-titled debut solo album, which featured many other guest musicians.