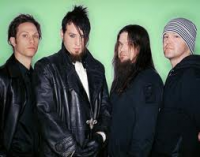 Mudvayne formed in 1996 in Peoria, Illinois and released their first EP, "Kill, I Oughtta", in 1997. The EP received local attention, but it would be another three years until they would hit it big.

The band first rose to fame in 2000 with their first single "Dig" from their debut album L.D. 50. The popularity of the song paved the way for the highly successful album and was followed by singles "Death Blooms" and "Nothing To Gein". In 2001, they released an extended version of the Kill, I Oughtta EP as The Beginning of All Things to End and continued their frequent touring.

Mudvayne are famous for wearing extravagant make-up, seen in both their music videos and concerts, and utilizing bizarre stage names. When their sophomore effort, 2002's The End of All Things to Come, the band changed make-up styles from multicolored face paint to dressing up as aliens. Mudvayne's reason for wearing such extravagant make-up was, according to the band, to add a visual aspect to their music and to set them apart from other run-of-the-mill metal bands. With the release of the 2003 single "World So Cold", Mudvayne abandoned their use of make-up and in 2005, their third album Lost and Found was released with the band members' real names and without any gimmicks. However, the band has said that future use of make-up is not out of the question. In late 2005 / early 2006, Mudvayne toured in support of KoRn on a worldwide basis. Their 2005 single, Determined, was included on the Need for Speed: Underground 2 soundtrack. Such exposure has been a considerable help to raise their popularity.

The music of Mudvayne has been described as "math metal", by their drummer, Matt McDonough. The term was used to explain the intricate nature of the music. Though the music does not quite fit officially under the "math metal" label, which is why Mudvayne's sound has been described as alternative metal by their fans and as nu-metal by critics. The band often showcases Ryan Martinie's funky bass playing as well as McDonough's use of alternating between single and double bass pedal drumming. In addition, the guitar playing of Greg Tribbett is very layered and unorthodox with its odd-meter timings, which helps in giving life to Chad Gray's vocals.