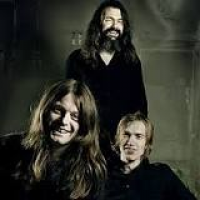 Motorpsycho (initiated 1989 at Trøndertun, Melhus, Norway) is a band from Trondheim. Their music can generally be defined as psychedelic rock, but they also mix in elements from metal, jazz, post-rock, pop and many other musical styles. The members of the band are Bent Sæther (born February 18, 1969, bassvocals) and Kenneth Kapstad (born April 20, 1979 drums). Until March 2005, Håkon Gebhardt (born June 21, 1969, drums) was also an integral part of the band. A press release concerning his departure is published at the Unofficial Website. In December 2007 it was announced that former Gåte drummer Kenneth Kapstad was the new drummer in the band as well as an official band member.