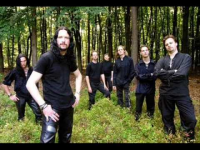 Morphia was a Dutch symphonic death/doom metal band formed in 1995. Having performed concerts with groups such as After Forever, Epica, Autumn, Orphanage and Imperia, Morphia has established themselves as one of the more prominent symphonic doom metal bands in the Netherlands. Signed to Dutch Fear Dark Records, Morphia has released 3 studio albums, musically evolving from death metal to gothic doom over the years. The band name comes from morphine, a medical drug used to relieve pain, but it is also a reference to Morpheus, the principal god of dreams in the Greek mythology.