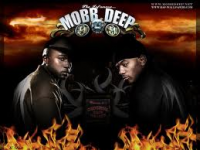 Mobb Deep is an American Hip hop duo from Queensbridge, Queens, New York, U.S., that consists of Havoc and Prodigy. The duo is "one of the most critically acclaimed hardcore East Coast Hip-Hop groups". The group is best known for its dark, hardcore delivery as exemplified by the single "Shook Ones Pt. II". Mobb Deep have become one of the most successful rap duos in Hip Hop having sold over three million records. The majority of their albums have been critically acclaimed, in particular The Infamous, which is considered to be classic among avid Hip-Hop listeners and general fans. They are partially credited for the resurgence of East Coast rap in the early to mid-'90s. Havoc and Prodigy were also judges for the 7th Annual Independent Music Awards to support independent artists' careers and breakthroughs. The group was briefly disbanded as of 2012 after a feud broke out between the members, but that discrepancy has since been dealt with and the group has reunited for a 20th anniversary tour and a new album.