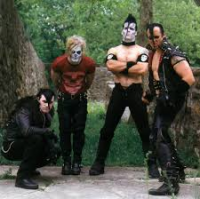 The Misfits are an American band often recognized as the progenitors of the horror punk subgenre, blending punk rock and other musical influences with horror film themes and imagery. Founded in 1977 in Lodi, New Jersey by singer and songwriter Glenn Danzig, the group had a fluctuating lineup during its first six years with Danzig and bassist Jerry Only as the only consistent members. During this time they released several EPs and singles, and with Only's brother Doyle as guitarist, the albums Walk Among Us (1982) and Earth A.D./Wolfs Blood (1983), both considered touchstones of the early-1980s hardcore punk movement. The Misfits disbanded in 1983 and Danzig went on to form Samhain and then the eponymous Danzig. Several albums of reissued and previously unreleased material were issued after the group's dissolution, and their music became influential to punk rock, heavy metal, and alternative rock music of the late 1990s and early 2000s.