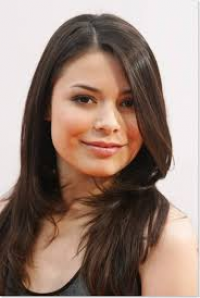 Miranda Taylor Cosgrove (born May 14, 1993) is an American actress and singer-songwriter. Cosgrove's career began at the age of three when she appeared in television commercials. Her film debut was in 2003, as Summer Hathaway in School of Rock. Cosgrove appeared in a number of minor television roles over several years before coming to prominence on the Nickelodeon TV series Drake & Josh. A few years later, Cosgrove landed the role of Carly, the lead character in the Nickelodeon TV series iCarly. As of May 2010, Cosgrove earned US$180,000 per episode of iCarly, making her the second-highest-paid child star on television. She was listed in the 2012 edition of Guinness World Records as the Highest Paid Child Actress for iCarly. Following the success of iCarly, a soundtrack album was released in June 2008, in which she performed four songs. Cosgrove's debut album Sparks Fly was released on April 27, 2010.