Middle Of The Road 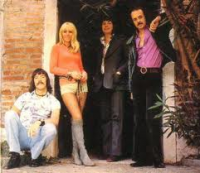 Middle of the Road are a Scottish pop group who enjoyed success across Europe and Latin America in the early 1970s. Three of their singles sold over one million copies each, and received a gold disc. The tracks were "Chirpy Chirpy Cheep Cheep" (which went on to sell over 10 million), "Tweedle Dee, Tweedle Dum" and "Soley Soley". By early 1972 alone the group had sold over five million records.