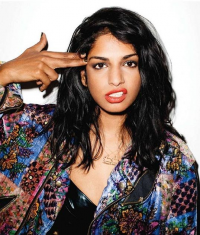 Mathangi "Maya" Arulpragasam (born 18 July 1975) better known by her stage name M.I.A., is a British recording artist, songwriter, painter and director. The moniker "M.I.A." is both a play on her own name and a reference to the abbreviation for Missing in Action. Her compositions combine elements of electronic, dance, alternative, hip hop and world music. Arulpragasam began her career in 2000 as a visual artist, filmmaker and designer in west London before beginning her recording career in 2002. Since rising to prominence in early 2004 for her singles "Sunshowers" and "Galang", charting in the UK and Canada and reaching number 11 on the Billboard Hot Dance Singles Sales in the US, she has been nominated for an Academy Award, two Grammy Awards and the Mercury Prize.