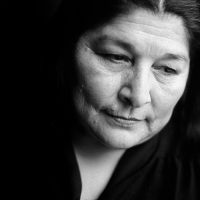 Haydée Mercedes Sosa (9 July 1935 – 4 October 2009), known as La Negra (literally: The Black One), was an Argentine singer who was popular throughout Latin America and many countries outside the continent. With her roots in Argentine folk music, Sosa became one of the preeminent exponents of nueva canción. She gave voice to songs written by both Brazilians and Cubans. She was best known as the "voice of the voiceless ones".