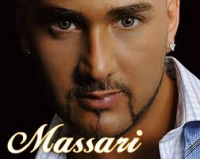 Sari Abboud (Arabic: ???? ???????), better known by his stage name Massari (pronounced m?-SAH-ree) is a Lebanese Canadian R&B, Pop, and hip hop singer. In Levantine Arabic, Massari (????? ma??ri ) means "money". Massari was born in Beirut, Lebanon, on December 10, 1980. When Massari was 10 years old, he and his family relocated to Montreal, Quebec. Later on he moved to Ottawa, Ontario. His cultural and social upbringing shaped his musical style. His music combines Middle Eastern melodies with western culture. He started his musical career in 2001-2002, and has released two albums, Massari in 2005 and Forever Massari in 2009. He has had a number of hit singles in Canada, Europe, the Middle East and internationally