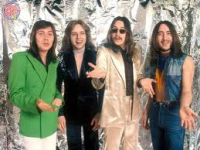 Marmalade was a Scottish pop rock group from the east end of Glasgow, originally formed in 1961 as the Gaylords, and then later billed as Dean Ford and the Gaylords. In 1966 they changed the group name to the Marmalade. The most successful period for the band, in terms of UK chart success, was between 1968 and 1972. From the early 1970s, after the original players began to drift away, the band evolved with many further changes and still exists to this day touring the nostalgia circuit. With the departure of Graham Knight in September 2010, there are now no original Marmalade members remaining in the band.