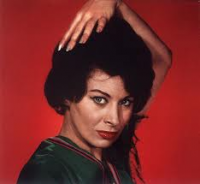 Magali Noël (born Magali Noëlle Guiffray; 27 June 1932) is a French actress and singer. Born in Izmir to French parents in the diplomatic service, she left Turkey for France in 1951, and her acting career began soon thereafter. She acted in multilingual cinema chiefly from 1951 to 1980, doing several films in Italian with renowned director Federico Fellini, for whom she was a favourite subject. She also acted in films directed by such well-known names as Costa Gavras, Jean Renoir, and Jules Dassin. Her career extended to television movies from roughly 1980 to 2002.