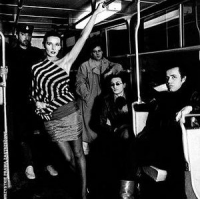 One of the most popular Polish rock bands, formed in 1975. It has released more than 100 titles and given several thousand concerts.

The first members were Marek Jackowski - guitars and Kora (Olga Jackowska) - vocals, as well as the Greek Milo Kurtis and Welsh John Porter.

Until 1979 the band played acoustic rock: from orientalising suits and ballads to acoustic punk rock and new wave. In 1979 the it became electrified.

Kora and Maanam revolutionised the Polish musical scene in the early 80s. They shocked the Polish audience in 1980 at the annual Polish Song Festival held in Opole with the punk hits "Boskie Buenos" (Divine Buenos) and "Żądza pieniądza" (Lust for Money). This was the beginning of their fame at home. They gained immense popularity, giving several hundred concerts a year for a period of five year.

The album "Nocny patrol" (Night Patrol) of 1983 was an immense success, becoming one of the most popular cassettes and LPs in Poland in the 80's. It was released in English as "Night Patrol" in West Germany and the Benelux countries at the same time.

In 1984-1985, Maanam had a successful tour of West Germany and the Netherlands. The albums "Night Patrol", "Totalski No Problemski - Maanam in Concert" and "Wet Cat" entered the music markets of those countries.

In 1991 Maanam returned to the Polish market of the new, post-communist reality with the album "Derwisz i Anioł" (The Dervish and the Angel). A year later, biography of Kora and Maanam "Podwójna linia życia" (Double Lifeline) was published.

The 1990s see a more reflective, mystical and soulful Maanam. The band's biggest success at that time was the album "Róża" (Rose; a triple platinum. The group performs in the USA, Canada and Australia.

In 2000, to mark its 25th anniversary, Maanam recorded their studio album "Hotel Nirwana" (Nirvana Hotel), on which they used loops, computers and samples for the first time, in order to enrich and diversify the sound. The producers were Neil Black from Britain and American Barry Kinder.

Maanam is the first band in Central Europe to have taken part in the Absolut Album Covers project - the cover of the album "O!" was included in it in 2002.

Three band's members changed in September 2003. With three guitar players leaving, Kora and Marek Jackowski were the only ones to remain from the original team. They soon invited four new musicians to join the band.

Some of the newest hits:

In May 2004, the band held its firs concert ever beyond Poland's eastern border, in Vilnius (former Polish communist authorities wouldn't allow Maanam to perform in the Soviet Union).

The lyrics and music of the band's most recent repertoire is created mainly by Marek Jackowski and Kora.

The most distinct the band's members is the leading vocalist, Kora Jackowska or just Kora. She has been writing most of the lyrics herself and is regarded as an independent artist. That is why the group is often referred to as "Kora and Maanam" and not just "Maanam".

Kora has become a celebrity in her own right in Poland. She has her own eccentric ways and likes to shock, e.g.: she appeared on the cover of the Polish edition of "Playboy" in April 1999, aged 48; she is advocating the legalisation of soft drugs (forbidden under Polish law); and she likes to appear on T.V. shows in the company of her miniature white poodle. She also is a great cat-lover.