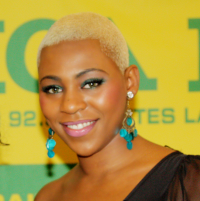 His first musical discoveries are (Tina Turner, The Battles, Diana Ross, Aretha Franklin & Michael Jackson ) who has many inspired her.

Linda Sedio, starts his career as photo model before ending up in the world of music. Despite to have been a member of a gospel choir, she had not planned to make a music career. Discovered in 2011 by a Music Producer of Farwell Records label at Atlanta, G.A and seduced by his powerful voice during a live session, he decided to follow and develop her as a recording artist.

Linda Sedio, record his debut single "Let Music Take Control" (Pop/Club) and as a remix club version released in January 2012 in the United States & Worldwide through a Online Distribution.

Nominated at the 3rd Edition of "Eworlds Music Awards" at Los Angeles in June 2012 with this single whose the music video has attracted millions of users; Linda Sedio, presents on most platforms of the world medias and regularly on tour in clubs / festivals wants to conquer a wider audience.

Linda Sedio, is many better rankings on various medias and Web medias. Under contract with the Label Farwell Records, we can classify her to the category Pop, Dance.