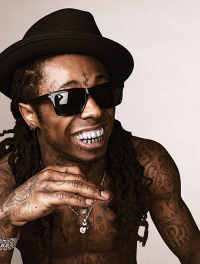 Dwayne Michael Carter, Jr. (born September 27, 1982), better known by his stage name Lil Wayne, is an American rapper. Formerly of the rap group Hot Boys, he joined the Cash Money Records collective as a teenager joined B.G. on his album True Story and eventually recorded for the label. Get It How U Live, released in 1997, was Lil Wayne's first album with Hot Boys, and Tha Block is Hot, his solo debut, came out 1999. Block debuted in the top ten on the American Billboard 200 chart and eventually led Lil Wayne to win a "Best New Artist" from The Source magazine and be featured on other rappers' singles, "Bling Bling" by B.G. and "#1 Stunna" by the Big Tymers in 2000.

After two albums released with little hype, Wayne reached higher popularity with 2004's The Carter and its two subsequent albums Tha Carter II (2005) and Tha Carter III (2008). During that time period, he appeared on several mixtapes and singles of other rappers.