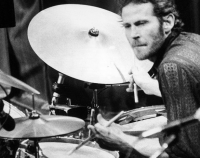 Mark Lavon "Levon" Helm (May 26, 1940 – April 19, 2012)was an American rock musician and actor who achieved fame as the drummer and regular lead vocalist for The Band. Helm was known for his deeply soulful, country-accented voice, multi-instrumental ability, and creative drumming style highlighted on many of The Band's recordings, such as "The Weight", "Up on Cripple Creek", and "The Night They Drove Old Dixie Down".
Helm also had a successful career as a film actor: appearing as Loretta Lynn's father in the Coal Miner's Daughter, as Chuck Yeager's friend and colleague Captain Jack Ridley in The Right Stuff, and as an iconic, Tennessee firearms expert in Shooter.
In 1998, Helm was diagnosed with throat cancer, which caused him to lose his singing voice. After treatment, his cancer eventually went into remission, and he gradually regained the use of his voice. His 2007 comeback album Dirt Farmer earned the Grammy Award for Best Traditional Folk Album in February 2008, and in November of that year, Rolling Stone magazine ranked him No. 91 in the list of The 100 Greatest Singers of All Time. In 2010, Electric Dirt, his 2009 follow-up to Dirt Farmer, won the first Grammy Award for Best Americana Album, a category inaugurated in 2010.[3] In 2011, his live album Ramble at the Ryman was nominated for the Grammy in the same category and won.[4] On April 17, 2012, his wife and daughter announced on Helm's website that he was "in the final stages of his battle with cancer" and thanked fans while requesting prayers. Two days later, Helm died at Memorial Sloan-Kettering Cancer Center in New York City