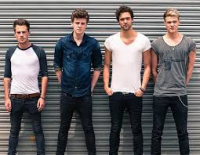 Lawson is a British band. The band consists of Andy Brown (acoustic guitar and lead vocals), Ryan Fletcher (bass guitar and backing vocals), Joel Peat (lead guitar and backing vocals) and Adam Pitts (drums). The band are currently based in London. Their debut album, Chapman Square, was released on 22 October 2012 and reached number 4 in the charts. Their first two singles "When She Was Mine" and "Taking Over Me'", reached the top 5, with their third single "Standing in the Dark", released on 14 October 2012, charting in the top 10. Their fourth single, "Learn to Love Again", debuted at number 28, before rising to number 15 on 27 January and rising again to number 13 on 15 February.