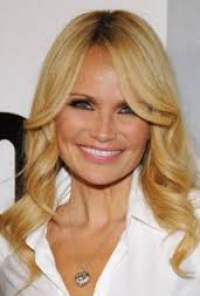 Kristin Dawn Chenoweth (; born July 24, 1968) is an American singer and actress, with credits in musical theatre, film and television. In 1999, she won a Tony Award for her performance as Sally Brown in You're a Good Man, Charlie Brown on Broadway, and in 2003, she received wide notice for originating the role of Glinda in the musical Wicked. Her television roles have included Annabeth Schott in NBC's The West Wing and Olive Snook on the ABC comedy-drama Pushing Daisies, for which she won a 2009 Emmy Award. Chenoweth also starred in the ABC TV series GCB in 2012.