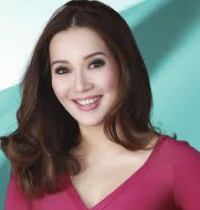 Kristina Bernadette Cojuangco Aquino (born February 14, 1971), commonly known as Kris Aquino, is a Filipina television and movie personality who gained prominence from her talk shows, game shows, and numerous endorsements. She is popularly referred to by the media with titles such as the Queenof All Media, Queen of Philippine Talk, Queen of Philippine Game Shows, and since 2010, the Presidential Sister ; both of her parents are natives from Tarlac. She is the youngest daughter of former Philippine senator Benigno S. Aquino, Jr. and Corazon Cojuangco-Aquino, who served as the 11th President of the Philippines, and sister of Benigno S. Aquino, III, the current President of the Philippines.