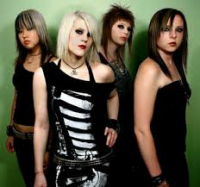 Kittie was formed in 1996, when Mercedes Lander and Fallon Bowman met in a high school gymnastics class. The lead singer and guitarist, Morgan Lander, is Mercedes\' sister. Their original bassist was Tanya Candler, who was forced to leave the band in the winter of 1999 due to health problems. She was replaced with Talena Atfield. In 2001, Fallon Bowman left Kittie without citing her reasons (although it was alleged that it was due to the rest of the band\'s discomfort with Fallon\'s obsession with the Columbine killings, this rumor, however, has been confirmed to be untrue by Fallon but never confirmed by Morgan or Mercedes) and eventually started a new project called Amphibious Assault. Tara McLeod replaced her in 2005. The band\'s guitar technician, Jeff Phillips, filled the spots during tours, but was never officially made a member.

Talena Atfield left in 2002. She was replaced on bass guitar by Jennifer Arroyo.

In 2004 they added a fourth member, the second guitarist Lisa Marx, and Jeff Phillips went full time to his side project Thine Eyes Bleed.

In 2004 Kittie released the album Until the End. As a joke, a band by the name of Until the End named their newest album Kittie to return the favour.

Until March 2005 they were signed to Artemis Records but parted ways due to \"a proposed amendment to the recording budget for the pending 4th Kittie album.\" Problems between the group and record label had been rumoured for a long time. The only official sign of these problems was a settlement out of court for unpaid royalties and 11 breaches of contract on Artemis records behalf, in March 2004.

On March 23, 2005, Morgan Lander made a post indicating that both Marx and Arroyo had left the band. Arroyo\'s split was amicable while Marx\'s was a surprise. Financial reasons were cited (nothing new, as had happened earlier with Talena Atfield) as well as, in the case of Arroyo, the desire to work outside of Kittie full time. Arroyo joined with Billy Graziadei of Biohazard, to form Suicide City.

In 2005 Kittie added 2 new members: Tara McLeod, guitar; and Trish Doan, bass. Most fans have stated that this is Kittie\'s tightest and most musically talented lineup yet. 2005 also brought the debut of Morgan and Mercedes\' clothing line \"Poisoned Black\" clothing. Morgan and Mercedes also appeared briefly in the documentary Metal: A Headbanger\'s Journey.

In early 2006, vocalist Morgan Lander provided vocals for the song \"It Turns To Rust\" on Canadian metal band Kataklysm\'s album In The Arms of Devastation.

In May of 2006 Kittie announced a joint venture to create their own record label, \"Kiss of Infamy Records\" which will include major label distribution by EMI records. Their 4th studio album is entitled \"Funeral For Yesterday\" and will be in stores on February 20, 2007.

It was also anncounced by Morgan Lander that Kittie will be releasing a new DVD. It was confirmed by mercedeslander.net. The DVD will be released along with the CD. The DVD runs for about 45 mintues.