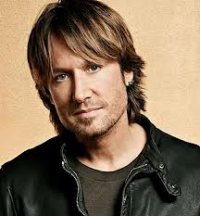 Keith Lionel Urban born 26 October 1967 in Whangarei, New Zealand is a country singer. Keith spent his early years in New Zealand, before moving to Australia and then relocating to Nashville. By age seven, Urban was already thinking about coming to America and making his mark in Nashville, Tennessee.

Urban began to learn the guitar at age 6 and began winning talent contests at age 8. By twelve, he was booking his band in local clubs, and at fifteen, he quit school to hit the road. In 1990, Urban signed with EMI in Australia and recorded his first solo album, which charted four No. 1 country hits in Australia. In 1992, Urban moved to Nashville to pursue the largest country music market in the world. Originally the front man for The Ranch, a three-piece group that released one album in 1997 to critical acclaim, Urban disbanded the group to pursue a solo career.

Urban released his self-titled American debut in 2000, achieving three top 5 hits and securing the title of Top New Male Vocalist Award at the 2001 Academy of Country Music Awards. During this same developmental time period, Urban battled a vicious addiction to alcohol and cocaine.

After reaching a personal rock bottom, he checked into Cumberland Heights, a treatment center in Nashville determined to give up the habit.

Keith, openly regarded as a modern day guitar virtuoso, has performed as a session musician on albums such as Garth Brooks' Double Live and Dixie Chicks' Fly.

Urban released Golden Road in 2002 and the success of the single Somebody Like You sent his career into high gear. The single spent eight consecutive weeks at the top of the charts, remaining at #1 longer than any other country artist in 2002. Three other singles were released, two went to #1 and the third was #3. The album went platinum in every country where it has been released and is triple platinum in the U.S.

In 2004 Be Here was released and nominated for best country album at the Grammy Awards and at the Academy of Country Music Awards. Out of the four singles released from "Be Here" three went to #1 and the fourth was #2. In 2006 the album went triple platinum in the U.S. Urban has also released Days Go By, a greatest hits collection, in Europe.

Urban continued his meteoric rise to fame in 2005 with the very successful Alive in '05 tour. He performed in the Live 8 Philadelphia concert on July 2nd 2005 and has been chosen by The Gap to appear alongside seven other bright musical stars in their "Favorites" campaign, and he was named CMA's Entertainer of the Year. He released a DVD in late September entitled Livin' Right Now, recorded in California.