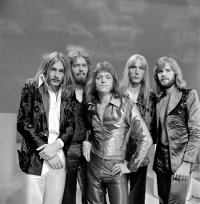 Kayak are a Dutch progressive rock band formed in 1972 in the city Hilversum by Ton Scherpenzeel and Pim Koopman. In 1973, their debut album "See See The Sun" was released, including three hit singles. Their main popularity was in the Netherlands, with their top hit (Ruthless Queen) reaching No. 6 on the Dutch charts in March 1979. They disbanded in 1982 after releasing nine albums.