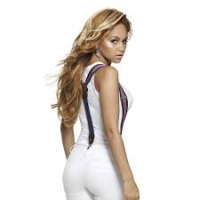 Kathleen Emperatriz "Kat" DeLuna (born November 17, 1987) is a Dominican American pop singer and dancer. DeLuna has a soprano vocal range. Her debut single, "Whine Up", reached the top ten in Belgium and France, peaked inside the top forty of the US Billboard Hot 100 and topped the Billboard Hot Dance Club Play chart. Her debut album, 9 Lives, was released in 2007. It peaked at number fifty-eight on the USBillboard 200 and charted within the top twenty of Belgium and Poland. In 2008, DeLuna began work on her second studio album, Inside Out. It was released in Belgium in 2010, peaking at number sixteen.