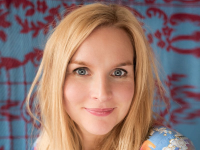 Judith Holofernes (born 12 November 1976 in Berlin) is a German musician and lyricist, who is most widely known as the lead singer of the German Pop-Rock band Wir sind Helden, a band whose non –conformist rise to fame, eclectic musical style- combined with Holofernes´ widely acclaimed lyrical prowess – helped it become one of the most written –about and successful German bands of the 2000s.