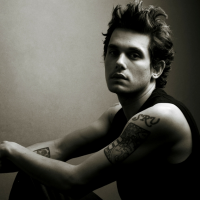 John Clayton Mayer (born October 16, 1977) is a Grammy-winning singer-songwriter who plays rock music. In 2005, he made a transition towards the blues genre.

Mayer grew up in Fairfield, Connecticut and became friends with future tennis star James Blake. Mayer attended Fairfield Warde High School for his freshman, sophomore, and senior years, but attended Brien McMahon High School in Norwalk, Connecticut for his junior year, where he was enrolled in the Center for Global Studies at Brien McMahon High School. Then known as the Center for Japanese Studies Abroad, it is a magnet program for students in Fairfield County wanting to learn Japanese.

Mayer listened to pop music, but it was not until the age of thirteen that his inspiration for playing the guitar began.When his father, a high school principal, gave him a Stevie Ray Vaughan tape taken from a confiscated tape player, Mayer discovered the blues and learned how to play the guitar. After two years of practice, he started playing at blues bars and other venues in the area. While in high school, he was in a band called Villanova Junction with Joe Beleznay, Tim Procaccini, and Rich Wolf.

After playing the guitar for several years, Mayer enrolled in the Berklee College of Music in Boston, Massachusetts at the age of 19. He soon realized that instead of studying music, he was more interested in writing and playing it. He chose to cut his studies short in favor of a move to Atlanta, Georgia. He began his career in earnest there, quickly making a name for himself in the local coffeehouse and club circuit, in venues like Eddie's Attic.

In 2003, he won the Grammy Award for Best Male Pop Vocal Performance for the 2002 release of the single "Your Body Is A Wonderland" from the album Room for Squares.

Also in 2003, Martin Guitars gave John Mayer his own signature model acoustic guitar called the OM-28 John Mayer.The guitar was limited to a run of only 404. The release of this acoustic was followed by the release of a signature Stratocaster electric guitar by Fender guitars in 2005 ? three different models in total. Unlike the Martin, two of Mayer's Signature Fender Stratocasters are not limited edition models, and can be found at many Fender dealers. The third Stratocaster, finished in Charcoal Frost metallic paint with racing stripe, was limited to only 100 guitars.

In the June 1, 2004 issue of Esquire, Mayer began a column called "Music Lessons with John Mayer." Each article features a lesson (some more scholarly than others) and his take on various topics, both personal and of popular interest. In the August 2005 issue he invited readers to create music for orphaned lyrics he had written. The winner was Tim Fagan of L.A., as announced in the January issue

In February of 2005, he was awarded the Song of the Year Grammy for his song "Daughters" from the album Heavier Things. For this award, he beat out such contenders as Alicia Keys, and Kanye West. He dedicated this award to his grandmother, Annie Hoffman, who died in May of 2004. He also won Best Male Pop Vocal Performance, beating Elvis Costello, Prince and Seal to the Award.

John allows audio taping at most live performances, and he also allows for the non-commercial trading of those recordings. He does this to give fans the opportunity to recreate the live experience. He also does this to encourage fan interaction. Trading recordings helped John become better known in the early stages of his career.

To date Mayer has toured with many groups, including Maroon 5, Guster, Counting Crows,The Wallflowers, and Teitur. John also made a cameo appearance on Chappelle's Show and was mentioned in an episode of Family Guy.

John does not drink, smoke, or do any drugs. He has a number of tattoos, including."Home Life" on the back of both of his arms, after the song off of his 2003 release, Heavier Things. In 2003, he got a tattoo of three squares on his right forearm, which sparked a lot of questions. Mayer explains that he likes getting tattoos, but not having too many, so he will fill the three squares in gradually.As of 2006, two are filled.

There have been a number of parodies and general critisms of Mayer, including jokes in Family Guy and other TV shows. Some people feel the John Mayer is the archetypal corporate rocker.[citation needed] Others argue that Mayer is too real, and that his vunerabiliy attracts derision due to the difficuly some "old school" rockers have with the new "sensitive" rock.[citation needed] In any case, his strange movements in concert and strained vocals are certainly a subject of parody.

In 2004, Mayer worked with hip hop artist and producer Kanye West, appearing both on rapper Common's "Go" and Kanye West's "Bittersweet" (for release in 2006). When asked about his ubiquitous presence in the hip hop community, and move away from pop music, he said "It's not music out there right now. That's why, to me, hip-hop is where rock used to be."

It was around this time that he began hinting a change in his musical interests, announcing that he was "closing up shop on acoustic sensitivity." In 2005, he began a string of collaborations with various blues artists, including Buddy Guy, BB King, Eric Clapton and jazz artist John Scofield. He also toured with the legendary jazz pianist Herbie Hancock, which included a show at the Bonnaroo Music Festival in Manchester, Tennessee.

Although Mayer has maintained a reputation for being a sensitive singer-songwriter, he is also an accomplished guitarist influenced by the likes of Jimi Hendrix, Stevie Ray Vaughan, Eric Clapton, Buddy Guy, Freddie King and B.B. King. Mayer has worked with many important blues musicians including Eric Clapton (Back Home, Crossroads Guitar Festival), Buddy Guy (Bring 'em in), John Scofield (That's What I Say) and B.B.King (80).

In the spring of that same year, Mayer formed the John Mayer Trio with bassist Pino Palladino and drummer Steve Jordan, both of whom he had met through previous studio sessions. The trio plays a combination of blues and rock music. In November of 2005, they released a live album called "TRY!" The first single "Who Did You Think I Was?" references Mayer's decision to move away from acoustic pop music. In October 2005, the John Mayer Trio opened for The Rolling Stones during a sold out club tour of their own.

John declared at the end of their performance at the Tempe Music Festival in March of 2006, "This is Steve Jordan, That's Pino Palladino, and I'm John Mayer. And for a few more minutes, we are the John Mayer Trio." His management has recently stated that his 2006 tour will be on a smaller scale, possibly parks and local blues festivals.

Mayer's new album "Continuum" is due out in July of 2006 and is being produced by Mayer himself and John Mayer Trio drummer and session veteran Steve Jordan. Mayer has made it clear that this album will stay within the same vein as his release with the trio, combining his signature pop music with the feel, sound, groove and sensibilities of the blues. A few tracks from his trio release "Try!" will be released on "Continuum" including "Vultures", "Good Love Is On The Way" and "Gravity." He has also recently teased fans with music on his Myspace page, including a "Demo Week" of acoustic demos of classic Mayer songs, random photos and pointless blogs. His antics included a humorous audio welcome message, and clips from a joke album "Precious Illusions" featuring Steve Jordan and Mayer himself, and a techno-ish track called "Identity Theft."