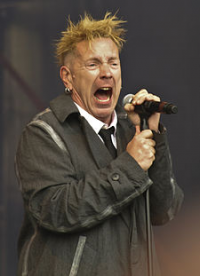 John Joseph Lydon (born 31 January 1956), also known by the former stage name Johnny Rotten, is a singer-songwriter and television presenter, best known as the lead singer of punk band the Sex Pistols from 1975 until 1978, and again for various revivals during the 1990s and 2000s. He is the lead singer of the post-punk band Public Image Ltd (PiL), which he founded and fronted from 1978 until 1993, and again since 2009. Throughout his career, Lydon has made controversial or dismissive comments about the royal family and other subjects.