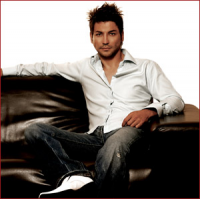 Johan started his career in the music industry as part of the band Eden, the most successful group in Afrikaans music history. Johan wrote most of the band’s super hits. His songs ‘Is jy bang’, ’54 5de straat’ and ‘Lyf teen lyf’ helped propel the band to all 3 of its Platinum albums and 2 SAMA (South African Music Awards) awards for best Afrikaans pop albums.
In 2005 Johan and Sean Else, fellow band member of Eden, started Mozi Records. Bok van Blerk was the first artist to be signed to the record label. Johan wrote and produced most of the album ‘De la Rey’ which became the biggest selling original Afrikaans record of all time, topping sales of over 200 000 units. Johan was the lead writer of the song ‘De la Rey’, and at this point it became apparent that Johan would excel tremendously in the art of songwriting. In that same year, the song ‘De la Rey’ also reached the front page of the New York Times.

In the following year Mozi Records signed their first female artist, Lianie May. Johan wrote and produced her album, also writing the song ‘ Jy soen my nie meer nie’, which put Lianie May on the map in the local music scene. The album became the biggest selling Afrikaans female debut album topping sales of over 120 000 units. A year after its release the album won the SAMA (South African Music Award) for the top selling album in the country, Steve Hofmeyr being the only other Afrikaans artist who had achieved this before. In 2008 Johan went on to win the Huisgenoot Tempo award for songwriter of the year for the song ‘Jy soen my nie meer nie’.

Johan teamed up with Coleske Artists and together they started a joint venture that would prove to have no equal in the Afrikaans music industry. Johan was the lead writer of the song ‘Ons vir Jou Suid-Afrika’ for the 2007 Rugby World Cup. This exact song coach Jake White indicated in his book was played to the player’s in the bus before the big games. That year the Springbok’s brought the Web Ellis trophy to South Africa after their victory over England. The album won the Huisgenoot Tempo award for best Afrikaans Compilation album and also became the best selling compilation album of the year.

Johan has written over 45 number one singles, and his songs and album sales surpassed the 1 million mark in 2009. This is unheard of for one writer to achieve this in such a short amount of time. With Coleske Artists, Johan wrote and produced the highly acclaimed ‘Afrikaans is Groot’ compilation albums, that soon became the biggest selling albums of its kind every year in the Afrikaans music industry, topping sales of over 300 000 albums.

Johan wrote the score for the locally produced musicals, ‘Ons vir Jou’, ‘Jock of the bushveld’ and ‘Shaka’, that got staged in the Nelson Mandela Theatre and the State Theatre in Pretoria in 2008, 2009 and 2010.

In 2010 he signed his first artist, Karlien van Jaarsveld. Karlien became the first artist to sell gold status in the Afrikaans music industry in 2011 with her album ‘Jakkals trou met wolf se vrou’. She also won the Huisgenoot Tempo award for best newcomer in 2011.
Furthermore Johan joined forces with Coleske Artists to write and produce the new album ‘Rugby is Groot’ for the 2011 Rugby World Cup, which was a top seller that year. The album was placed in the hands of the 30 Springbok’s going to the World Cup by Victor Matfield himself.

In 2012, he signed Dewald Wasserfall, and wrote the hit song “Eendag as ons groot is” which has reached number 1 on the charts of several radio stations.

Johan wrote the songs ‘ Juliet’ by Steve Hofmeyer, ’Net voor die storm kom’ by Theuns Jordaan, ‘Melanie’ by Jay (which won the Huisgenoot Tempo awards for song of the year 2011), and ‘’n Vrou wil dit hoor’ by Bobby Van Jaarsveld which won the Ghoema 2013 Song of the year award. Johan shared the Ghoema 2013 Songwriter of the year award with Riana Nel. Johan was also responsible for the much loved and acclaimed duo ‘Lianie and Jay’ for which he wrote the song ‘ Toe stop my hart’, a number one single on 7 different radio stations, including Jacaranda FM.

Johan wrote most of the songs for the Afrikaans film ‘Platteland’ that released in December 2011, featuring, Lianie May, Bok Van Blerk and Karlien. He is currently producing the musical film “As Jy Sing” that will release in November 2013.

He will continue to write albums and produce artists under Johan Vorster Songs, and will also join forces with Coleske Artists to create memorable musical albums and artists that have true longevity.
Johan is married to Rencha Vorster, co-writer and member of Johan Vorster Songs. They live in Pretoria and have 2 boys, Joshua and Raphael.