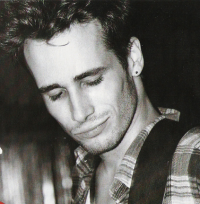 Jeffrey Scott "Jeff" Buckley (November 17, 1966 – May 29, 1997), raised as Scotty Moorhead, was an American singer-songwriter and guitarist. He was the son of Tim Buckley, also a musician. After a decade as a session guitarist in Los Angeles, Buckley amassed a following in the early 1990s by playing cover songs at venues in Manhattan's East Village, such as Sin-é, gradually focusing more on his own material. After rebuffing much interest from record labels and his father's manager Herb Cohen, he signed with Columbia, recruited a band, and recorded what would be his only studio album, Grace.