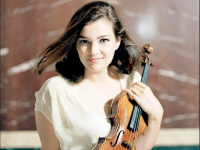 The 2012/13 season sees Janine embark on a number of international tours. At the beginning of the season, she performs Szymanowski’s Violin Concerto on a European tour with London Symphony Orchestra and Valery Gergiev, including two highly-anticipated performances at London’s Barbican centre. She is also the soloist on tour with the Münchner Philharmoniker and Lorin Maazel in Europe, and with the Budapest Festival Orchestra with Ivan Fischer in Europe and North America. Maintaining a longstanding relationship with the Royal Concertgebouw Orchestra, Janine joins Charles Dutoit on a tour of South Africa to celebrate the orchestra’s 125th anniversary. In early 2013 Janine works with the Academy of Saint Martin in the Fields as part of an extensive tour through Istanbul, Salzburg, London, Eindhoven and Germany.

Following acclaimed performances in past seasons, she also makes returns to the Symphonieorchester des Bayerischen Rundfunks, performing the world premiere of the Penderecki Double Concerto with Julian Rachlin, the NHK Symphony Orchestra, the Deutsches Symphonie-Orchester Berlin, the hr-Sinfonieorchester and Rotterdam Philharmonic orchestras and makes her debut with the Israel Philharmonic Orchestra.

A devoted chamber musician, Janine performs on a duo recital tour in Japan with pianist Itamar Golan, performing a programme which includes works by Beethoven, Szymanowski and Dubugnon. She established and curates the annual International Chamber Music Festival in Utrecht, and since 1998 has performed each season at Spectrum Concerts Berlin, a chamber music series at the Berlin Philharmonie. Her regular chamber partners include Martin Fröst, Torleif Thedéen, Maxim Rysanov, Boris Brovtsyn and Amihai Grosz.

Particularly renowned for her success in the digital music charts, Janine records exclusively for Decca (Universal Music). Future releases include a Prokofiev disc with the London Philharmonic Orchestra and Vladimir Jurowski, and a chamber project disc, including Schubert’s String Quintet and Schoenberg’s Verklärte Nacht, celebrating the 10 year Jubileum of the Internationaal Kamermuziek Festival Utrecht. Past recordings include Beethoven and Britten Concertos with Paavo Jarvi, Mendelssohn and Bruch with Riccardo Chailly, and Tchaikovsky with Daniel Harding.

To date Janine has received the Dutch Music Prize from the Ministry of Culture – the highest distinction an artist can receive in The Netherlands, as well as numerous other awards, including four Edison Klassiek Awards, three Echo Klassik awards, the Preis der Deutschen Schallplattenkritik, as well as the NDR Musikpreis for outstanding artistic achievement. She has been given the VSCD Klassieke Muziekprijs for individual achievement and the RPS Instrumentalist Award for performances in the UK. Janine was trained by Coosje Wijzenbeek, Philipp Hirshhorn and Boris Belkin, amongst others.

The outstanding instrument played by Janine Jansen is the 'Barrere' by Antonio Stradivari (1727) on extended loan from the Elise Mathilde Foundation.