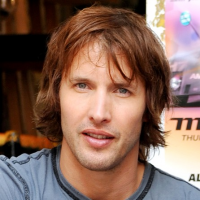 James Blunt (born James Hillier Blount, 22 February 1974) is an English singer-songwriter whose debut album, Back to Bedlam, and single releases especially the number one hit "You're Beautiful" brought him to fame in 2005. His style is a mix of pop, rock, folk and adult contemporary. Along with vocals, Blunt plays a wide variety of instruments including the piano, guitar, organ, marimba, and mellotron.

He is signed to Linda Perry's American label Custard, and became the first British artist to top the American singles chart in nearly a decade when his song "You're Beautiful" reached number one on the Billboard Hot 100 in 2006. The last British artist to do so had been Elton John in 1997.

Blunt was born in Tidworth, Wiltshire, England in 1974 and educated at Elstree School, Woolhampton, then Harrow School. From there he gained an army sponsored place at Bristol University, before finally completing his education at the Royal Military Academy Sandhurst. Blunt's father was in the British Army Air Corps, and his family has a long history of military service. The Blount family is also known to have owned and restored Cley windmill.

Blunt was then a commissioned officer in the Life Guards regiment, a unit of the Household Cavalry of the British Army. He rose to the rank of Captain and served as an armoured reconnaissance officer in the NATO peacekeeping force in Kosovo, amongst the 30,000 troops advancing intoPristina, the capital of Kosovo. It was while on duty in Kosovo that he wrote his song "No Bravery". He was also on duty for the funeral of the Queen Mother on April 9, 2002. In a TV4 Nyhetsmorgon interview, and in an ExtraTV interview, he mentioned that he had been shot at more times than 50 Cent.

Within a year of leaving the army, Blunt teamed up with former 4 Non Blondes singer Linda Perry, who had written and produced songs for P!nk, Courtney Love and Christina Aguilera. Perry signed him to her US-based Custard Records label, and Blunt recorded his album in Los Angeles with producer Tom Rothrock at the Embassy studios while lodging at a place owned by actress Carrie Fisher.

James Blunt's debut single in the UK was "High" (co-written with Ricky Ross of Deacon Blue). This song peaked below the Top 100 of the UK Singles Chart. However, the song was chosen to appear in a Vodafone commercial in Italy, and as a result was a Top 10 hit in that country. Some people have suggested that the title of his song "High" is in reference to drugs; Blunt, however, claims this to be untrue. His second single, "Wisemen", improved upon that position with a #44 peak. A support slot on Elton John's 2004 tour followed.

Blunt's third single "You're Beautiful" was his breakout hit. The song debuted at #12 in the UK, and demonstrated a rare trend of upward mobility on the UK charts, rising all the way to the #1 position six weeks after its debut. The song also received massive airplay in the UK, which helped propel Back To Bedlam to #1 on the albums chart, unseating the record-breaking album X&Y by Coldplay from the pole position.

After the success of "You're Beautiful" in the UK, the song crossed over to mainland Europe, becoming one of the biggest hits of summer 2005 across the continent.

In the USA, "You're Beautiful" made its debut in the summer of 2005 on WPLJ, a prominent radio station in New York City, despite not having been released to radio yet. Once the song was released to radio stations in the Autumn of 2005, the song climbed into the Top 10 at three radio formats: Adult Contemporary, Adult Top 40, and Adult Alternative, eventually climbing to number 1 on the Hot 100.

The videos for all of Blunt's singles to date feature symbolism and dark imagery. In the first video for "High", he is buried in a desert. In the first video for "Wisemen", he is kidnapped and taken hostage. In the video for "You're Beautiful", he alludes to suicide by jumping into an ocean as the final lyrics are sung . The re-release video for "High" then features Blunt running in a forest. The re-release video for "Wisemen" has Blunt burning identification papers, and then walking through a forest while he is on fire. And in "Goodbye My Lover" he is playing the piano and singing while clips of a man and woman kissing and cuddling are flashed up every few seconds. (Mischa Barton starred in the "Goodbye My Lover" video.)

Blunt has made numerous television and radio appearances throughout the UK, Europe, North America, New Zealand and Australia. On 3 December 2005, he was the musical guest on Saturday Night Live. His music has been featured on television programmes throughout the world. He made his acting debut on the (US) ABC Family Channel programme Wildfire, first aired on January 30, 2006. He also appeared in episode 103 of the CBS comedy Love Monkey (original air date February 7, 2006) . He was interviewed and performed "You're Beautiful" and "Goodbye My Lover" on the Oprah Winfrey Show on March 8, 2006 (taped on February 21, 2006).

In April 2006, the song "No Bravery" was released in France, and rose to number 15 in the charts.

Blunt has toured extensively throughout the world since the recording of "Back to Bedlam." His earliest gigs included supporting performances for several well-known UK performers, including six opening slots for Elton John. In 2005, he performed 90 live shows, mainly across the UK and Europe, ending the year supporting Jason Mraz in a North American tour. The "Back to Bedlam World Tour" started off in Europe in early January 2006, moving through the UK in February, and then progressing to his first full headlining tour in North America starting in March. In April, Blunt performed several dates in Australia, New Zealand and Japan before returning to North America for May, and then starting another UK/European tour in June and July. October and November saw the return of Blunt to North America. In addition to the songs from the "Back to Bedlam" album, Blunt has included several cover songs, including "Where Is My Mind?" and "Breakfast in America." Blunt has also performed several unrecorded original works in live performances.

The Sunday Telegraph's Mandrake column has claimed that Blunt is in fact three years older than his publicity claims. Critics of Blunt have cited this, along with vast marketing investment and 'inoffensive' songs, in seeing him as more in the mould of a commercial act rather than a genuine singer-songwriter, despite Blunt initially having little to no investment from both the independent record label he was signed to or from distributors Atlantic Records. On May 29, 2006, the British press reported that a local radio station Essex FM had announced that it had banned all songs by Blunt from being played, after listeners of the station repeatedly called and said they were "fed up with them". The station had actually just stopped playing the hit single "You're Beautiful" after having it on constant rotation for 14 months. They played the single "Wisemen" 26 times the next week.

A survey conducted this year reported that Blunt was the fourth most annoying thing in the UK, beaten only by cold callers, queue-jumpers and caravans

According to The Sun, You're Beautiful has eclipsed Robbie Williams' Angels as the wedding favourite in the United Kingdom. In the same article, Goodbye My Lover was revealed to be a funeral favourite as well, with two high profile funerals in Canada using the song in memorials for Laval police officer Valerie Gignac and Toronto teenager Jane Creba.