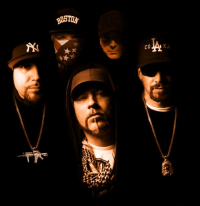 House of Pain is an American hip hop group who released three albums in the 1990s before lead rapper Everlast left to pursue his solo career. The group's name is a reference to the H.G. Wells novel The Island of Dr. Moreau, a reference carried further by the naming of their 2011 tour "He Who Breaks the Law". The group is best known for its 1992 hit single "Jump Around", which reached number 3 in the United States, number 6 in Ireland and number 8 in the United Kingdom. The group broke up in 1996 but reformed in 2010, after the trio had been members of supergroup La Coka Nostra for several years.