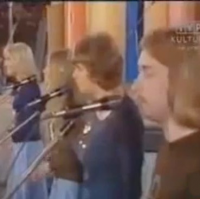 The Grupa I (meaning "i" Group) was a Polish pop group active in 1973-75, formed by composer Juliusz Loranc.

The group recorded a vinyl record with EP Muza. Its greatest and apparently only hit was the song Radość o poranku (Joy at Dawn) which won the National Festival of Polish Song at Opole in 1974.

Of the four group only Marlena Drozdowska didn't disappear from the musical scene after the break-up. She worked with the Polish cabaret Pod Egidą (Under the Protectorate) for some time. She sang with the German group Gerd Michaelis Chor in 1976-80. Later she created her own band Hotline which would give concerts in Western Europe, notably in West Germany, Austria and Switzerland.

In 1985 Marlena Drozdowska returned to Poland. Her unwanted role in the development of a cheap musical style is interesting to note. In 1991 she recorded Mydełko Fa (Little Fa Sopa), a song designed as a parody of a new musical phenomenon in Poland of those times, artistically low-level pop songs of a new style called disco-polo. The song had just the opposite effect, though. Instead of discrediting the new style as cheap, Little Fa Soap became a hit with disco-polo fans, who apparently were oblivious of its aim to ridicule. What is more, they actually adopted it as their unofficial anthem. And the disco-polo style, instead of disappearing, only then began to gain more and more popularity among some groups of the society.