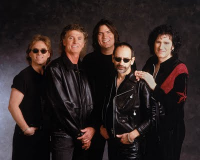 Grand Funk Railroad (also known as Grand Funk) is an American blues rock band that was highly popular during the 1970s. Grand Funk Railroad toured to packed arenas worldwide. A popular take on the band during its heyday was that, although the critics hated them, audiences loved them. The band's name is a play on words of the Grand Trunk Railroad, a railroad line that ran through the band's home town of Flint, Michigan.