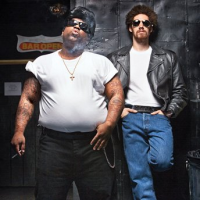 So who is Gnarls Barkley? Diligent pen pal to Bangs, soul giant Isaac Hayes, and Violent Femmes ringleader Gordon Gano? Well-kept romantic consort to pop stars Mariah Carey and Janet Jackson? English teacher to synth-rock legends Kraftwerk? Croupier at a mysterious annual gathering in the Bay Area that allegedly draws members of the Wu-Tang Clan and Britian's Stuckist art collective It seems that, in the music world, Gnarls Barkley is always nearby yet impossible to find. The membership rolls of both the Atlanta hip hop collective Dungeon Family and Athens, Georgia's psychedelic enclave Elephant Six list Barkley as an affiliate, but mention him to either group and they'll shoot each other frightened looks and start talking basketball. The rumors fly hard in every direction and remain defiantly unverifiable.

Gnarls Barkley is a musical collaboration between producer Danger Mouse and rapper/singer Cee-Lo. Their first album, St. Elsewhere, was released by Warner Music on April 24, 2006 in the UK and on May 9 in the U.S. by Atlantic/Downtown Records. It was made available for download one week earlier in the U.S. iTunes Music Store and other online download stores.

"Crazy", their first single, gained some of its popularity due to the use of it on primetime BBC Radio 1 DJ Zane Lowe's television advert, and it was also made Record of the Week by Ken Bruce of BBC Radio 2. It was released as a single on April 3, 2006, preceded by its release as digital download and 12" vinyl single in March 2006. On 2 April 2006, it became the first ever UK number one based on download sales alone.

In an interview with Observer Music Monthly, Danger Mouse denied that the band's name is a reference to former basketball player Charles Barkley, saying "Nope. It's just like everything else on this record. There was no conscious decision about stuff."

The duo made their debut performance at the Coachella Valley Music and Arts Festival on April 30, 2006, but their first concert, hosted by Myspace.com, part of the Secret Show series, took place at The Roxy Theatre in Los Angeles on April 28, 2006. They are set to perform at Lollapalooza 2006 in Chicago.

Clinton Jacks works as a cook in a Waffle House restaurant near the South Carolina coast. One night back in the year 2000, he recollects, I saw Danger Mouse come in here. Cee-Lo was with him. And they had this other dude with them, dressed up like H.R. Pufnstuf. Danger Mouse and Cee-Lo ate big meals, but H.R. Pufnstuf only wanted hash browns. Then they left, Danger Mouse and Cee-Lo, but H.R. Pufnstuf stayed around for hours. He must've had twenty cups of coffee. I went in the bathroom, and when I came out, he was gone. But he left a $500 tip on the table. And he left a little note that said, Compliments to the chef. Gnarls Barkley.

Danger Mouse, a/k/a Brian Burton, produced the infamous Grey Album, a full-length blend of the Beatles music and Jay-Z's raps that became a cult classic after it was suppressed by EMI. He recently garnered a Grammy nomination for Producer of the Year for his work with the virtual band Gorillaz. Having recorded with enigmatic rapper MF DOOM, not to mention a cast of voices from Adult Swim, Danger Mouse is no stranger to outsized characters. He admits that he helped out with St. Elsewhere, the first album credited to Gnarls Barkley. A lot of people ask me about him, says Danger Mouse when the topic arises. He found one of my Pelican City records, which was this downtempo experimental stuff I did in college, and I started getting letters from him. He's not [Blur frontman and Gorillaz co-creator] Damon Albarn I can blow that myth out of the water for you. A lot of people think he lives in South Carolina. Personally, I think you'd be more likely to find him in Europe.

From beneath his shroud, Burton's spiritual adviser, the usually silent Dr. President, murmurs something unintelligible and then Not that I know where he is.

Cee-Lo Green, a/k/a Thomas Calloway, is a Dungeon Family alumnus, once-and-future member of Goodie Mob and a wildly eclectic solo artist. His music is steeped in the gospel and blues traditions of the Southeast, merging timeless soul with experimental funk and hip hop. He confirms reports that his dramatic voice and soul-rummaging lyrics appear on portions of St. Elsewhere. "Yes, I believe that I sang on at least some of the Gnarls Barkley record," he says. "But we are not the same person. I am Cee-Lo. I am a humble trumpet, and the wind of God blows through me. You might consider Gnarls the spit valve on the trumpet, were you inclined to consider him at all." As he walked away, Cee-Lo could be heard to mutter, "You want to know who he is? He's the dude who owes me thirty-five dollars, that's who he is."

Does St. Elsewhere shed light on this mysterious personage, or does it further obscure him? It's a complex record, to be sure. It employs the full spectra of pop music and human emotion. The warm, breezy single "Crazy" and the spry finger-snapper "Smiley Faces" recall "Songs In The Key Of Life" and "Good Vibrations" in equal measure. "On Line," a lament for the lonely and ambitious, could be a tricked-out G-funk holdover. Often dark and unpredictable, St. Elsewhere nevertheless retains its sense of joy throughout. Even Cee-Lo's darker moments, his introspection on "Necromancer", and the chilling "Just A Thought," on which our hero fights off suicidal ideation, flourish in their lush, funky surroundings. It constantly shifts its shape and never sacrifices momentum. And it contains a mess of contradictory clues about just who Gnarls Barkley actually is.

"I've made him my life's work," says Milton Pawley, a Los Angeles music writer widely considered the world's leading Barkley scholar. "And even with all the evidence I've gathered, I'm still not sure he really exists. Maybe Gnarls Barkley isn't a person. Maybe he's out there in the wind. Maybe he's inside of all of us. Like "Bob" from Twin Peaks, only more funky and less evil."

Perhaps Gnarls Barkley will never fully reveal himself. But if St. Elsewhere is any indication, his music bears Marvin Gaye's depth of feeling, Jeff Buckley's emotive theatrics, and wild courage not seen since Prince's prime. Behold the most exciting debut of 2006. A psychedelic soul masterpiece. Gnarls Barkley may not be easily located, but he won't be a stranger.