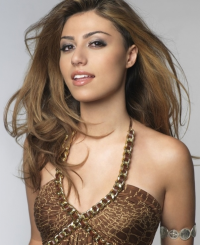 Gabriella Lucia Cilmi ( CHIL-mee; born 10 October 1991) is an Australian singer-songwriter. In 2008, Cilmi was awarded six ARIA awards, including Single of the Year and Best Female Artist. Her debut album, Lessons to Be Learned, was released in 2008, and was a moderate international success. In 2010 she recorded her second album, Ten. She is working on a third album, whose lead single is Sweeter in History.