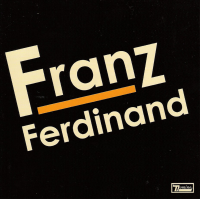 Franz Ferdinand is a Scottish alternative rock band. The band's debut self-titled album released in 2004 debuted on the UK album charts at number 3, and won the 2004 Mercury Music Prize. So far, the band has released six singles of which "Take Me Out", "The Dark of the Matinee" and "Do You Want To" were top 10 hits in the UK. They are influenced by 1980s post-punk and garage rock.

In late 2001, singer and guitarist Alex Kapranos and bassist Robert Hardy began playing together in Glasgow. After meeting Nicholas McCarthy they started to rehearse together at McCarthy's house. McCarthy was classically trained on the piano and double bass but initially played drums. The trio then met up with Paul Thomson who had played drums with Yummy Fur, leading him to swap instruments with McCarthy.

The band started playing at an abandoned warehouse in the Gorbals which they named "the Chteau". Franz Ferdinand also held rave-like "happenings" combining music and art; Hardy was studying painting at the Glasgow School of Art at the time. When the local police shut the events down, the band found an abandoned Victorian courthouse and played there.

In a 2004 interview with VH1, Alex Kapranos described the sound they were seeking. "On songs like 'Come on Home,' we wanted to sound like Donna Summer and Link Wray mixed together, but it doesn't sound like that at all! We thought we could sound like Prince, too, but what we were really trying to do was take on the attitudes of different bands and combine them in our own way."

The band had recorded an EP worth of material which they intended to release themselves. However, the band's reputation was spreading rapidly, and Domino offered them a contract to release an EP called Darts of Pleasure in the latter part of 2003. The band developed its reputation further by supporting Hot Hot Heat and Interpol as well as winning a "Phillip Hall Radar Award" at the NME Awards of 2004 (announced in late 2003). Epic Records signed the band to a contract in 2004 for the USA, although the band's primary label for the rest of the world is still Domino.

Franz Ferdinand have been quoted as saying they wanted to make "music that girls can dance to." This was combined with their art school background on their self-titled debut released in early 2004. It debuted at number 3 in the UK album charts in February 2004 and at number 12 in the Australian album charts in April 2004. While the album had only reached the bottom reaches of the Billboard 200 album charts in the US as of early 2004, it reached the top 5 of the indie rock and Heatseeker charts for debut charts. After a couple of North American tours and heavy rotation of the "Take Me Out" video on MTV, the album eventually reached No. 32 on the Billboard 200 later in 2004 and has been certified platinum in the US for sales exceeding 1,000,000. As of October 2004, there have been five singles released from the album namely:

"Darts of Pleasure" placed on the UK Singles Chart;

"Take Me Out" reached the #3 on the UK charts, #66 on the Billboard Hot 100, and #3 on the Billboard Modern Rock Tracks chart. It also made the top 10 of the Irish and Canadian charts and the top 40 in a composite European chart as well as being voted number one in the Australian Triple J Hottest 100 for 2004.

"The Dark of the "Matinee" reached #8 in the UK singles charts and the top 30 on the World Modern Rock Charts (a composite chart of US, German, UK, Swedish, Finnish, Canadian and Australian modern rock charts); and

"Michael" reached the #17 on the UK singles charts.

"This Fire" was released in North America in November 2004. It reached #17 on the Billboard Modern Rock Tracks chart.

The song "Michael" was the first in a trend among newer bands to write songs with lyrics reflecting a more fluid sexuality. "Michael" is a frenzied dance/rock song based on a private joke among the band about a friend of theirs who got drunk and was dancing unabashedly at a club.

The Franz Ferdinand album received a generally strong positive response from critics. The New Musical Express said that the band was the latest in the line of art school rock bands featuring The Beatles, The Rolling Stones, The Who, Roxy Music, the Sex Pistols, Wire and Blur. It rated the album as 9 out of 10 and said: "This album is the latest and most intoxicating example of the wonderful pushing its way up between the ugly slabs of Pop Idol, nu metal and Britons aping American bands. What these blossoming bands have in common is the absolute conviction that rock ?n? roll is more than a career option."

The BBC's review of the album said: "At only 38 minutes long Franz Ferdinand may not be a particularly long album, but it is a masterpiece of funky, punky, suave cool from the first track to the last." The All Music Guide rated the album as four out of five stars and said "Franz Ferdinand ends up being rewarding in different ways than the band's previous work was, but it's apparent that they're still one of the more exciting groups to come out of the garage-rock / post-punk revival."

On September 7, 2004 the album was awarded the 2004 Mercury Music Prize. Take Me Out gained first place in the Australian Triple J Hottest 100 for 2004, winning more than twice the votes of the second-place entry.

In 2005, "Take Me Out" was in an ad campaign for the PlayStation Portable game system. It also became associated with the YTMND fad involving a PSP ejecting its disc automatically. "Take Me Out" was also included on the kid-oriented album Kidz Bop 8 and the TV show Video Mods. In 2004, "Take Me Out" was in the EA Sports video game NHL 2005, while "This Fire" was in Burnout 3: Takedown, made by EA Games and Criterion Games. Also "Michael" was featured on the soundtrack of Gran Turismo 4, made by Polyphony Digital, finally, "Tell Her Tonight" was placed on the track of FIFA 2005

The name for the band was originally inspired by a racehorse called The Archduke Ferdinand. After seeing the horse run on television the band began to discuss the Archduke Franz Ferdinand and thought it would be a good band name because of its sound and the implications of his death. They discussed it in a very early interview with Scottish magazine, Is This Music:

"Mainly we just liked the way it sounded," says Bob. "We liked the alliteration." "He was an incredible figure as well," continues Alex. "His life, or at least the ending of it, was the catalyst for the complete transformation of the world" he was a pivot for history. But I don't want to over-intellectualise the name thing. Basically a name should just sound good like music. Paul has a rather grander notion. "I like the idea that, if we become popular, maybe the words Franz Ferdinand will make people think of the band instead of the historical figure." Ironically, Google turns up 2,490,000 results for the string "Franz Ferdinand" band but only 71,600 for "Archduke Franz Ferdinand"