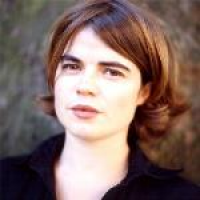 Françoiz Breut (born 10 December 1969 in Cherbourg) is the stage name of Françoise Breut, a French illustrator and chanteuse of moody and melancholic pop. Breut got involved with music when her then-fiancé, French pop star Dominique A, asked her to contribute vocals on three songs of his 1993 album, Si Je Connais Harry. A then wrote and arranged most of the songs for her eponymous debut album. She has also collaborated with Yann Tiersen, Louise Attaque, and Calexico. She lives in Brussels, Belgium.