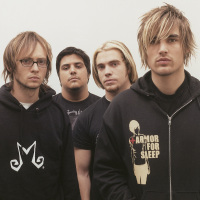 Fightstar are a British alternative rock band from London, formed in 2003. The band's line-up comprises lead vocalist, guitarist and keyboardist Charlie Simpson, guitarist and vocalist Alex Westaway, bassist Dan Haigh and drummer Omar Abidi. Although generally considered a post-hardcore band, Fightstar are also known to implement metal, progressive and acoustic elements into the band's sound. During the band's initial emergence, they were faced with much scepticism due to Simpson's former pop career. However, they began to receive positive reactions to early live shows and their debut EP, They Liked You Better When You Were Dead (2005) was a critical success. Since then, their three studio albums have obtained top 40 chartings and critical praise. Fightstar's debut album, Grand Unification (2006) was regarded as "one of the best British rock albums of the past decade" by Kerrang! editor Paul Brannigan.