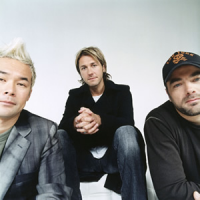 Feeder are a British alternative rock band based in Newport, Wales. The band was formed in 1992 under the name of "Reel" by the remaining members Grant Nicholas, Jon Lee and Simon Blight of electroacoustic group Raindancer, after the departure of their guitarist John Canham, although Simon Blight departed in 1992 to make way for Taka Hirose, after the band had used many session bassists from 1992-1995. Feeder's lineup after signing with The Echo Label in 1994 consisted of Grant Nicholas (guitar/vocals) and Jon Lee (drums), while still using session bassists and were heard on early demos. In January 2002, Jon Lee took his own life in his Miami home before former Skunk Anansie drummer Mark Richardson, began to record and play with the band before being made an official member. In May 2009 he parted company with Feeder to return to a reformed Skunk Anansie. Since Mark's departure, Feeder have employed drummer Karl Brazil, although for sessions and touring commitments for Renegades (2010) they employed Australian Damon Wilson and former Mexicolas drummer Tim Trotter. Feeder has released eight studio albums, three compilations, two EP's and 34 singles.