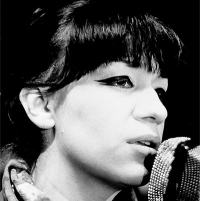 Renowned Polish singer, one of the most haunting vocalists in the history of Polish vocal music. She is praised for her unique interpretations, expression and unusual stage personality. She is associated with the style popular in Central and Eastern Europe, called in Polish poezja śpiewana, or sung poetry.

In Poland, Demarczyk is sometimes nicknamed "Czarny Anioł", "the dark angel", due to her style of dressing in black and one of the songs which marked the beginning of her career.

Demarczyk's professional life as a singer, after a short period with a student's cabaret, started at Poland's most famous literary cabaret, the Piwnica pod Baranami or Ram's Cellar in Cracow in 1962. She met Polish composer Zygmunt Konieczny, there, and worked with him for the next four years.

Her first major success came at the 1963 National Festival of Polish Song in Opole where she was awarded for the songs:
Karuzela z madonnami (Merry-go-round with Madonnas)
Taki pejzaż (Such a Landscape)
Czarne anioły (Black Angels).

The same year, she sang at the Sopot International Song Festival, being lauded as "the best artist of 1963". In 1964 she was second, there, with her astounding rendition of the "Grande Valse Brillante" (based on the poetry by Julian Tuwim).

Following this success at home, Demarczyk held concerts abroad, notably at the Olympia in Paris and at the ceremony celebrating 20th anniversary of United Nations.

In 1966, she started to co-operate with another composer, Andrzej Zarycki

Her first longplay album was released in 1967 and became a Platinum.

She left the Piwnica pod Baranami artistic team in 1972 and embarked on her own, distinct musical career.

Nearly every one of her songs is a work of performativ art and is well known in Poland.

In the 1990s her albums were re-released on CDs. Demarczyk continued to perform live until the late 1990s. In 2001, the foundation Teatr Ewy Demarczyk, or Ewa Demarczyk's Theatre, was created.

Demarczyk received several awards in recognition of her service to the Polish culture.

Her repertoire consists of sophisticated and demanding interpretations of poems. The lyrics of are often based on works of great poets such as Polish Julian Tuwim and Krzysztof Kamil Baczyński or non-Polish Goethe, Mandelstam, Rainer Maria Rilke or those of avant-garde writers such as Miron Białoszewski.

Her songs convey strong emotions, partly associated with the counter-culture movement in Poland of the 1970s and 1980s. Through subtle means of imagery, symbolism and metaphors that implicitly refer to concepts of freedom, some of the songs expressed the general discontent with the authoritarian rule of that period. Many other of her songs deal with existential topics.

In her performances, she unites dramatic theatrical expression with vocal art (she is a graduate of both a drama school and conservatory, where she studied piano). Every song she performs is in fact a small musical drama of enormous intensity.