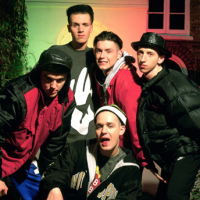 EMF are an alternative dance band from England. The band, from the Forest of Dean in Gloucestershire, came to prominence at the beginning of the 1990s. During its initial eight-year run (1989–1997), EMF had released three studio albums and had gone on hiatus and reformed twice. Their first single, "Unbelievable," reached number 3 in the UK Singles Chart, and was a number one hit on the US Billboard Hot 100 chart. Their debut album, Schubert Dip, went to number 3 in the UK Albums Chart.