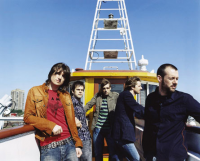 Embrace are an English post-Britpop band from Bailiff Bridge, Brighouse, West Yorkshire. To date they have released five studio albums, one singles album and one B-sides compilation. The band consists of brothers singer Danny McNamara and guitarist Richard McNamara, bassist Steve Firth, keyboardist Mickey Dale, and drummer Mike Heaton. The group have released five studio albums – The Good Will Out (1998), Drawn from Memory (2000), If You've Never Been (2001), Out of Nothing (2004) and This New Day (2006). Their sixth album Embrace is set to be released in April 2014.