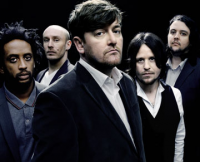 Elbow are an English alternative rock band comprising Guy Garvey (vocals, guitar), Richard Jupp (drums, percussion), Craig Potter (keyboards, piano), Mark Potter (guitar, backing vocals), and Pete Turner (bass guitar, backing vocals). They have played together since 1990 and have released five studio albums: Asleep in the Back (2001), Cast of Thousands (2003), Leaders of the Free World (2005), The Seldom Seen Kid (2008), and Build a Rocket Boys! (2011). In the UK, all of their albums have made the top twenty, and seven of their singles have been in the top forty.