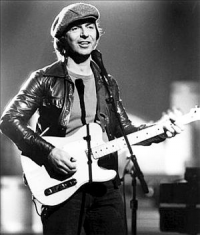 Dion Francis DiMucci (born July 18, 1939), better known mononymously as Dion, is an American singer-songwriter whose work has incorporated elements of doo-wop, pop oldies music, rock and R&B styles—and, most recently, straight blues. He was one of the most popular American rock and roll performers of the pre-British Invasion era. He had more than a dozen Top 40 hits in the late 1950s and early 60s. He is best remembered for the 1961 singles, "Runaround Sue" and "The Wanderer", written with Ernie Maresca.