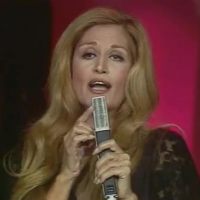 Dalida was born with the Italian name Iolanda Cristina Gigliotti in Egypt to Italian parents but naturalised French.

She debuted in 1956 and recorded her last album in 1986, a few months before her death, so her career spanned 3 whole decades!

She received 55 gold records and was the first singer to receive a diamond disc. She performed and recorded in more than 10 languages including: French, Arabic, Italian, Greek, German, English, Japanese, Hebrew, Dutch and Spanish.

Due to her brilliant artistic career and her suicidal death, she became an iconic image as a tragic diva and renowned singer.

Since her death, Dalida has become a cult figure to a new generation of fans. According to a poll which was commissioned by the Encyclopædia Universalis in 1988 and published in Le Monde and which aimed to reveal the personalities who had the greatest impact on French society, Dalida polled second, behind Général de Gaulle.

May she rest in peace...