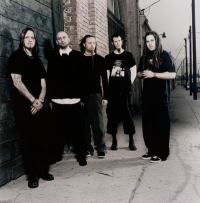 Cold is an American post-grunge band, formed in 1996 in Jacksonville, Florida. With two gold-albums, Cold has sold around 2 million records in the US alone. On November 17, 2006, it was announced on MySpace that, after a period of uncertainty since that February, the group had decided to disband. In July 2008, it was announced that the original line-up would reunite for a tour in early 2009. This became permanent and the band released their fifth studio album Superfiction on July 19, 2011.